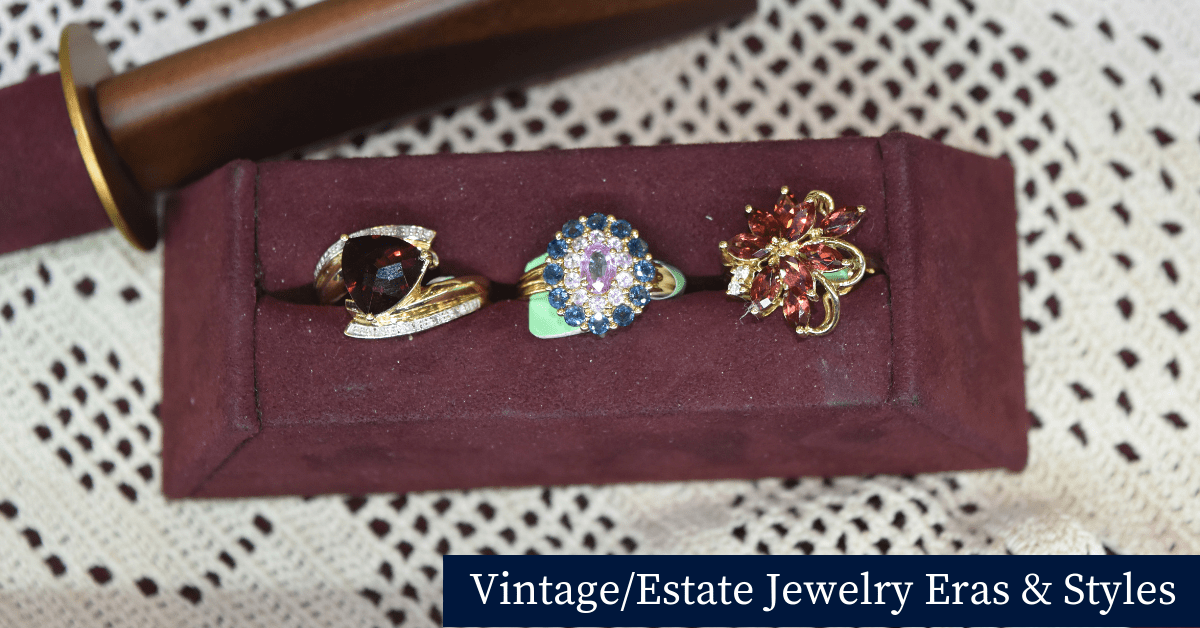 During the Georgian Era, various styles of jewelry were designed. There was a regal feel to jewelry during this era and fine jewelry was exclusive to the wealthy. Diamonds were the most popular center stone in a ring. This was a time for an appreciation of colored stones such as rubies, emeralds, and sapphires. Interestingly, diamonds were most often mounted with an enclosed back with a piece of foil placed at the base of the ring to help enhance the brilliance of the diamond. The diamonds in these rings from this era (if you’re lucky enough to find one!) have a grey or smoke-colored look to them. Typical settings during this era were the cluster and bezel. Yellow gold was a popular choice for the ring itself while rose, old mine cushion, and table cuts were popular for the choice of diamond cut. Most jewelry from this era has been redesigned into something more “modern”, leaving very few pieces to survive to present day. Because of this Georgian jewelry is extremely rare and precious; brooches are rings are your best bet at finding an original piece from this era.

The Victoria Era, anmed for Queen Victoria of England, aligns perfectly with the beginnings of the Romantic Movement, a rediscovery of the Renaissance. Symbols such as hearts, bows, flowers, and birds were also adapted within fine jewelry pieces creating confident and joyful designs. Jewelry began to have a romantic meaning attached to it; rings from this time were most often engraved with initials, wedding dates, etc. Fine jewelry became more accessible in the United States and middle class men and women began wearing jewelry that was once thought to only be suited for royalty. When Queen Victoria’s husband, Albert, passed in the middle of the Victorian era, jewelry entered a phase resembling her state of mourning. Dark stones were now paired with yellow gold (a series of gold discoveries helped to reduce the cost of gold during this time). Black onyx and black enamel were used. Jewelry inspiration referred back to the medieval times, or the Middle Ages. The last twenty years of the Victorian era brought about a return of the more romantic designs. Typical settings during the Victorian era included the cluster and bezel. The rose, old mine, old european, and table cuts were the most popular diamond cuts during this era.

We now enter the 20th Century during the Edwardian Era, named for King Edward of Britain. The return of traditional jewelry materials like platinum and diamonds brings about a style that is feminine and delicate, graceful and elegant. Details are intricate during this time period and is best known for the use of filigree techniques. These threads of metal allowed for a delicate, lace-like look. The wife of King Edward VII enjoyed wearing diamonds and pearls which helped to shape this era of jewelry trends. Tassels, bows, flowers, and scrolls were all motifs that helped to define this era of fine jewelry. The most popular settings during this era were cluster and bezel. Popular diamond cuts remained the same as the Victorian era. The white-on-white appearance of diamonds, pearls, and platinum symbolized sophistication and class at the beginning of the 20th Century.

Diamonds and platinum still remained the most popular during the Art Deco era, creating a period of expressive and bold styles. During this time, we begin to see a shift away from intricate details and a transition into modern, clean lines. The Art Deco Era began during the Roaring 20s, a time for dramatic social and political times with the presence of gangsters, flappers, and speakeasies. People began moving to the cities and leaving the family farm. Folks began making more money and we entered in a “consumer society”. New styles of dancing and dressing emerged, and many traditional styles were rejected. Jewelry became a way for women to express individuality and personality. Futuristic and geometric shapes can be found within Art Deco jewelry. Typical settings during the Art Deco era included cluster and prong. White gold and platinum grew in popularity while old european and transition cuts were the most popular diamond cuts. Advancements in diamond cutting allowed for the introduction of the round brilliant cut style. Accessibility to jewelry continued to grow during the middle of the 20th Century as well.

The term “retro” was not coined until the 1970s, and we sometimes consider jewelry from this era to be “cocktail jewelry”. During a time of depression and war,it may take you by surprise that  jewelry styles did NOT revert back to a more simplistic and minimalistic look. Jewelry was “larger-than-life” during the Retro era. During these dark times, women craved jewelry that they saw Hollywood superstars wearing; they wanted jewelry that caught your eye and was full of glitz and glamor. Jewelry during this time period tended to be oversized to complement their standard business attire. This was a way for women to express their femininity in a male-saturated and male-driven work environment. Bows, ribbons, ruffles, and flowers can be found in jewelry from this era. Due to a lack of platinum during war times, gold, silver, and copper were all swapped into jewelry designs. Synthetic gems also took the place of precious stones. Less precious stones such as the aquamarine, citrine, and topaz found their place in Retro “over-the-top” jewelry.

While eras are only determined after the time has passed, it will be interesting to see when the next “era” begins. We are still considered to be in the Modern era that is described as light and textural. With the invention of new technology, jewelry designing escalated and the sky was the limit. The Modern era plays off of the previously mentioned trends in earlier eras. It is now a time for customization of engagement rings and creating a look all your own. Taking vintage jewelry found at estate sales or passed down from previous generations and giving the piece a “modern” twist is also very popular. The introduction of lab-grown diamonds in the 21st century and their influence on the jewelry industry is still unknown. This is a time for discovery while also bringing back styles that date back hundreds and even thousands of years.

Jackie and Catherine Live on The Morning Blend!

August 2019 Couple of the Month – Sheryl and Tom

Feel free to contact us by phone or via the form below.