How did you two meet?

Tom: She actually walked into my life! She was a friend of my sister’s, and she came by our house to pick her up one night – I answered the door. And there she was! It took a while before we actually dated, probably a month or two. I had to figure out the – “Who was that? Is she available?” – details. But we eventually went out. 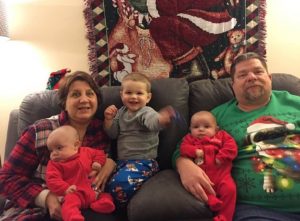 Sheryl: Our first date was out to dinner. He picked me up at my girlfriend’s house. I remember thinking, “Oh, I don’t know about this…” – it was a little weird because I knew his sister but didn’t really know him. Then after that went well we started going to the drive-in theater a lot with a bunch of friends, and we’d hang out after that.

So how long until you got engaged?

Sheryl: It wasn’t too long after. He was in the military. We got engaged on March 27th, and married in August. So he went away to survival school for the military, came back and we planned our wedding in four weeks, and got married!

Did you pick out the ring, Tom?

Tom: I had a friend whose dad owned a jewelry store. So one day we just came in a picked out a ring.

Sheryl: Yeah it was kind of a – “I like that, I’d like to do this” sort of thing. I chose a ring with two emeralds because his birthday is in May. So the ring has a diamond and two emeralds.

Do you still have the ring?

Sheryl: I do have the same ring today. I don’t wear it anymore though, only because I would like to hand down the stones to my granddaughter. Or my grandson who’s birthday is also in May!

How was the wedding?

Tom: It was your typical, south-side Polish wedding! We had it in a church, and had the reception was the basement.

Sheryl: Almost everyone who stood up was a family or a friend. We had a lot of couples as a part of the wedding, it was just kind of how our friends played out at the time. His best friend was the best man, and my sister was the maid of honor. Then we also had two miniature bridesmaids who were my nieces, and his cousin was the ring bearer. So our family was very involved!

Tom: We didn’t have any silverware! Somehow the silverware got misplaced. So we had to scrounge up some plastic forks and knives.

Sheryl: Because we were in a church basement, we were able to go through some things and find enough backup plastic silverware. We only have immediate family at dinner, so we lucked out!

Any milestones as a couple you are proud of? 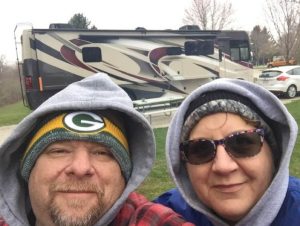 Sheryl: We have two wonderful children, and three grandchildren who we just adore. Our identical twin granddaughters were born on August 23rd, right before our anniversary. To me that was just a joy. I was hoping they might make it to the 24th, but we’ll take what we can get!

Tom: And at the end of this month will be 34 years, so we think those are some pretty good marks.

Sheryl: We also bought a motor-home recently so we’re looking forward to retiring and traveling a bit more.

Anything you guys enjoy doing now?

Sheryl: Camping! If we ever mention the word camping, our family is right behind us on that.

Tom: Generally kids try to get some space from their parents, but for some reason when camping is brought up everyone loves coming by.

Sheryl: We also have a boat and jet skis that we enjoy. Usually Little Muskego and Beaver Dam. And always with the family!

Anything you guys would recommend to newlyweds?

Tom: Have patience with each other. Things won’t always go good, so it is important to work things out.

Sheryl: Forgive and forget. Simple as that.

Tom: One thing a friend’s dad told us too, many years ago, is to never go to bed mad at each other. So that’s something we’ve always kept in mind.

Thanks so much guys! And congratulations again!

Tom: Thanks for picking us!

Sheryl: Yes this was a lot of fun. Looking forward to our date night!

What’s Going on at The Jewelry Center – August 2018

For the quickest response, please text us using the blue icon at the bottom right.